What Does It Mean to Be Indigenous? Gregg Deal's Tutse Nakoekwu (Minor Threat) Exhibition Comes to the Emmanuel Art Gallery

Gregg Deal is a provocative artist based in Colorado. Opening January 31, 2022, the Emmanuel Art Gallery will host the most comprehensive collection of Deal’s art displayed to date. Deal, who has exhibited extensively around the country and internationally, continues to push boundaries:  Tutse Nakoekwu (Minor Threat) challenges the perception of Indigenous people and culture while exploring nuances of identity and existence.Gregg Deal's performance art, for instance, addresses the way Indigenous people are portrayed and viewed.

Gravitating to punk music as a teenager, Deal says he related to the music’s expression of feeling like a disenfranchised outsider. Growing up in a predominately white neighborhood in Park City, Utah, Deal didn’t experience a childhood with other children who looked like him or viewed the world like he did. It wasn’t until Deal was in college, studying visual art at George Mason University, that he came across the work of James Luna. It was the first time he experienced another artist who was “unapologetically Indigenous.”

It is that same spirit of un-apology and autonomy that Deal brings to his art. His body of work, which takes the form of visual and performance art, advocates for something very specific: That Indigenous people have agency in their art and their stories.

Most art depicting Indigenous people in the U.S. reinforces stereotypical tropes of assumed 19th or early 20th century imagery––as if Native Americans are a uniform people frozen in time and trapped in sepia tone. In reality, as Deal likes to point out, there is an incredible diversity among the Indigenous people who live within the borders of the United States. The federal government currently recognizes 574 tribes speaking over 300 languages. Deal is careful to say he doesn’t speak for Indigenous people; rather he speaks to his own experience as a Numu person and member of the Pyramid Lake Paiute Tribe.

The ancestral home of Deal’s people is the Great Basin area of Nevada. He is interested in seeing Indigenous people’s art that is decoupled from a western buyers’ market. This manifests as art that challenges western stereotypes. If you’re wondering what Native American art in the western buyers’ market looks like, look no further than tourists buying dreamcatchers at a gift shop. Deal’s Vehicular Dreamcatch, 2022, challenges blind appropriation of Indigenous wares that ultimately lose their meaning in the process of appropriation. “Who are all these people trying to sleep in their cars?” Deal asks, chuckling.

Indigenous People in the Modern World

In contrast to this one-dimensional depiction of Indigenous people, Deal’s art portrays Native people in the modern world. It asks the viewer to see the subject as human, with multiple layers of identity and association connected to them.

Deal started developing the series of works he calls The Others in the spring of 2019. This is the first time the comprehensive grouping of paintings will be displayed together. Drawn in comic book style, the pieces show Indigenous people in reimagined stereotypes borrowed 1940s comics. The paintings depict Natives fighting white settlers while making bold statements of strength; the speech bubbles are from the lyrics of Deal’s anti-establishment punk heroes: Sex Pistols, Minor Threat, Black Flag and Misfits.

Deal is threatening boundaries in an art world steeped in imperialism. Having suffered censorship from art institutions, these conflicts have pushed him even further to explore his voice and stake his own space. His work grapples with challenging topics such as boarding schools, representation, visibility, and historical atrocities, all of which are a threat to systemic expectations of how Indigenous artists exist within spaces not traditionally created for them.

Tutse Nakoekwu (Minor Threat) by Gregg Deal will be on display January 31 – March 1, 2022 in the Emmanuel Art Gallery, located at 1205 10th Street Plaza on the Auraria Campus in Denver. A celebration is scheduled for February 17th from 5pm-8pm. 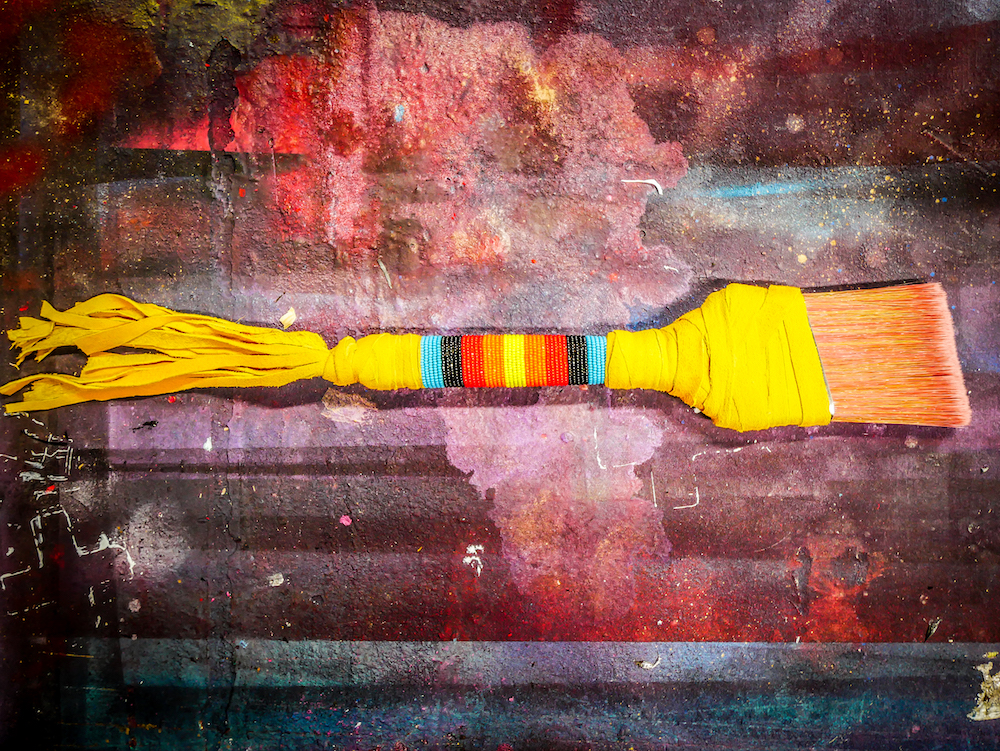