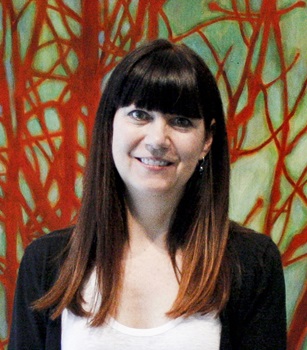 Denver artist Trine Bumiller broke up the monotony of lockdown by taking strolls through her backyard. Like many backyards, hers is a delicate balance of minimally tamed wilderness and stepping stones that need nearly constant weeding. The lockdown strolls, which often expanded beyond her own property, reminded the artist of her childhood in Cincinnati, Ohio, where she would spend hours outside among the bees, the trees, and the dirt. This reflection on the natural world and the solace it provides manifests in Bumiller’s newest collection of paintings, which she has organized into an exhibition called Garden of Eden.

Bumiller’s Garden of Eden will be on display in the Emmanuel Art Gallery on the Auraria campus starting June 16, 2022, and features images of flowering trees and mother nature’s rejuvenating colors. The collection plays with the idea of Rimpa, a Japanese artistic style which typically lacks a central object and leaves some open space within the work. The idea, says Bumiller, is to invite the viewer into the work through the open space.

Bumiller's work has graced many a gallery and public forum both domestically and abroad. The exhibition in the Emmanuel will represent the third time Bumiller has displayed her work in a religious building (the Emmanuel was not only the oldest standing religious structure in Denver, serving at times as Christian church and Jewish synagogue, and was the first building to be placed on Denver's Landmark Preservation Commission). Previously, Bumiller has had exhibitions in The First Congregational Church of Boulder and a gallery that was once a chapel at Regis University.

Although the Emmanuel no longer serves as home to a religious congregation, Bumiller’s vision for the former house of worship is nonetheless inspired. The building “almost asked for a biblical theme,” Bumiller says. She notes that Denver, in loose parallel to the Garden of Eden’s location at the intersection of four rives, is located at the confluence of two rivers and that the Emmanuel, specifically, occupies space at the origins of the city. Also drawing inspiration from the medieval Siena Cathedral in Italy, Bumiller (with the help of the Emmanuel staff) has transformed the inside of the Emmanuel to reflect the horizontal stripes of Siena’s most famous religious building. She’s always wanted to display her work in a church, Bumiller shares, because of the way art, architecture, and incense combine to create an experience.

A mythical Garden exists in Christianity, Islam, and Judaism, Bumiller notes, adding that most cultures have something in their origin stories depicting a time when things were better, more peaceful. And that most of us are striving to return to that ephemeral state. Through her work, Bumiller wants to acknowledge the change we are inflicting on the environment around us while also conveying that there was once a very beautiful environment here. Every once in a while, we catch a glimpse of that original beauty ourselves.

Everything Bumiller created for this show bears in mind the Garden theme and the space of the Emmanuel. For instance, Bumiller used the gallery’s large, round windows near the ceiling as inspiration for a set of round paintings. The colorful pieces feature branches of trees shown from the perspective of looking up at them through a window. “I love how the windows [in the Emmanuel] frame the branches [of the trees outside],” Bumiller explains. The main piece of the exhibition is spread across five separate wood panels and features two trees, meant to reflect the account of Genesis which mentions two trees in the Garden of Eden, the tree of life and the tree of the knowledge of good and evil. In Bumiller’s painting, one tree is a palo verde on the right and the other a crabapple on the left, although which tree represents which biblical tree is left to the interpretation of the viewer.

Putting together the entire exhibition was a “meticulous” process as Bumiller describes it. The process starts with the overall concept and looking for images in the thousands of photographs that she has taken over the years to coincide with the conceptual theme of the exhibition. Then she pared down which photos to focus on, then sketched out a small version and a larger, scaled version of each painting. Only then does she paint. Working with oil, Bumiller used 40 layers of paint, and each layer takes a day to dry. Which means a single painting in the collection took at least 40 days to create. The result is a stunning collection of paintings arranged mostly as diptychs and strikingly colorful against the gray and white stripes now adorning the gallery walls.

The experience Bumiller has painstakingly created is one which aims to help the viewer return to simpler times, perhaps from one’s childhood, when nature was both exotic and familiar at the same time. Additionally, "I want to raise awareness of an earth—a 'Garden of Eden' before the fall, that existed unspoiled by the interventions of humans," Bumiller says.

An opening reception for Garden of Eden is scheduled for June 16th from 5 – 7pm in the Emmanuel Art Gallery, located on the Auraria campus. The exhibition will be on display starting June 16th courtesy of Robischon Gallery.

About the Artist Trine Bumiller

Trine Bumiller’s work focuses on memory and landscape in paintings and installations that balance between realism and abstraction.  She has a BFA from Rhode Island School of Design and the European Honors Program, Rome. She has exhibited widely, including solo exhibitions at the University of Wyoming Art Museum, the Las Cruces Museum of Art, the History Museum of Bosnia, the Fort Collins Museum of Art, the University of Colorado Art Museum,  the Cincinnati Art Museum, the Boulder Museum of Contemporary Art, and the DMZ Museum in South Korea.

Bumiller has received grants from the Colorado Council on the Arts, Rocky Mountain Women’s Institute, and the Colorado Federation of the Arts, among others. She has been reviewed in Art in America, artltd., ArtNews, the New Art Examiner, the Denver Post, and Westword. She has been an artist in residence at Yaddo, Ucross, Pistoletti Foundation, Denali and Rocky Mountain National Parks, and Rocky Mountain Women’s Institute. Bumiller’ public art commissions include the Colorado Convention Center, the Four Seasons Denver, the Peninsula Hotel Hong Kong, and the University of Colorado. She is represented by Robischon Gallery in Denver and Zg Gallery in Chicago.