LYNX Camps give high school students a real-life look into the kind of creative community they could be a part of at CU Denver’s College of Arts & Media (CAM). This summer, 285 high school students from 22 different states and four different countries got the opportunity to create with a group of like-minded peers, learn their craft from experienced instructors, and pursue their creative passions through higher education.

Eight one-of-a-kind programs are offered across the three camp sessions, with Session One focusing on visual arts and audio production, Session Two on music, and Session Three on animation and filmmaking. Guided by current CAM students, knowledgeable faculty, and experienced practitioners, students dive head-first into their concentration, leaving camp with a better understanding of how to turn their passion into a career.

A FOCUS ON PRACTICAL AND CONTEMPORARY 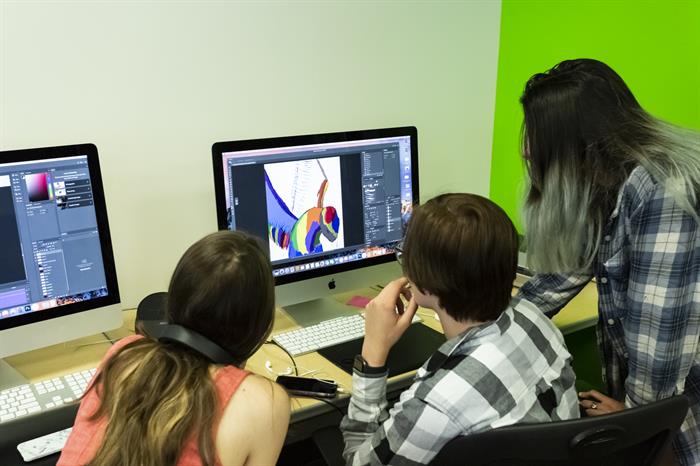 One of the highlights of CAM programs is their focus on contemporary art, and that's reflected in LYNX Camps as well. Technology in the creative industry is constantly changing, and it’s imperative to get familiar with the capabilities of all the available technology. CAM faculty are on the cutting edge, so LYNX students get practical, hands-on experience with the best equipment.

Even if you aren’t in the music business, you’ve probably heard of Ableton. Ableton Live is the industry standard for the biggest producers and music makers around, and knowing your way around the program is a huge leg up for young artists releasing music independently. The Session One Audio Production students and Session Two Music Industry students worked with the program to create their own beats. In the Audio Production program, the focus was on electronic music. With the guidance of CAM faculty and student leaders, students created and edited their own tracks from scratch.

While Music Industry students were able to work in many different genres, many students chose to focus on electronic music. When the Mobile Device Ensembles performed at the end of camp for parents and their fellow campers, they utilized Ableton Push, which gave them access to pre-downloaded sounds at the push of a button. This program allows electronic artists the ability to perform live like musicians playing traditional instruments would. You can hear their songs here.

The suite of tools offered by Adobe is like nothing else on the market today. Anyone who’s tried playing around in Adobe programs knows they aren’t straight forward. Luckily, 2D Animation/Illustration students had incredible guidance. After learning the principles of animation, the 2D Animation/Illustration students used Adobe’s suite of editing programs to bring movement to their 2D images. After hand-drawing their subjects, they used Photoshop to add movement to their pieces. Adding layer upon layer, students brought life to their 2D drawings. You can see some of their work here.

The Filmmaking students also utilized the Adobe Creative Cloud. After planning their scripts and filming the necessary scenes, students spent hours editing their footage. Using the video editing software Adobe Premiere, students were able to cut their footage together, add voiceover and music, and put together an entire short film themselves. You can see their films here.

While technology can take things to another level, not all art forms require high-tech software. The LYNX Session One City Murals program focused on bringing physical art to life. Students studied A Sunday Afternoon on the Island of La Grande Jatte 1884, painted by French artist Georges Seurat. The students put on costumes and went to the campus lawn to stage the painting and take pictures in order to create a contemporary counterpart to the 19th century original. 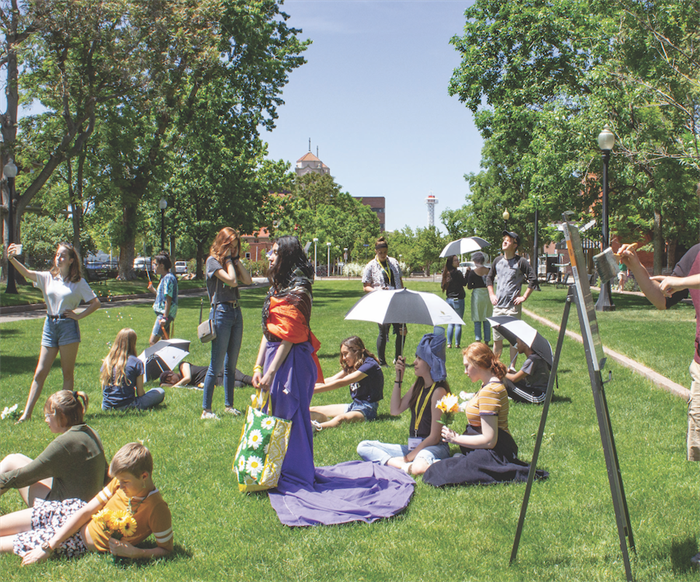 Each camper took a portion of the larger photo and reproduced it with acrylic paint on a 2’ square canvas.

“Painting and collaboration were the strategic components in this project’s development from the beginning design to the on-site installation. I was so impressed with the energy, talent and dedication of this group of high schoolers – with an emphasis on talent,” said Vivian George, CAM Visual Arts faculty member and City Murals instructor. 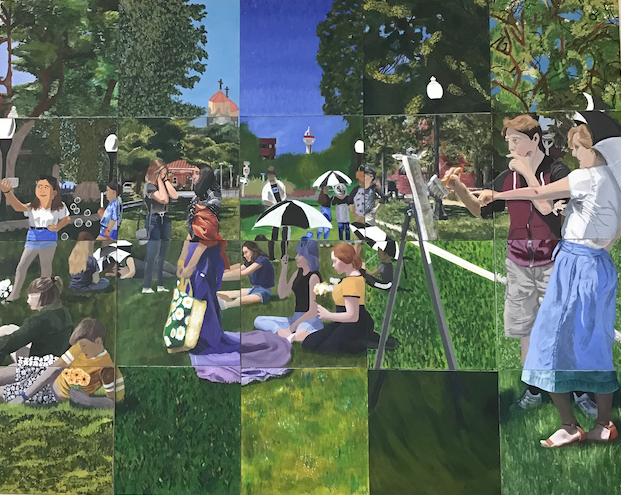 The mural is currently housed in the CU Denver Wellness Center.

You can learn more about other LYNX programs like Photography, Comic Book Character Design, and Digital Animation/Motion Graphics here.


PUTTING IN THE WORK 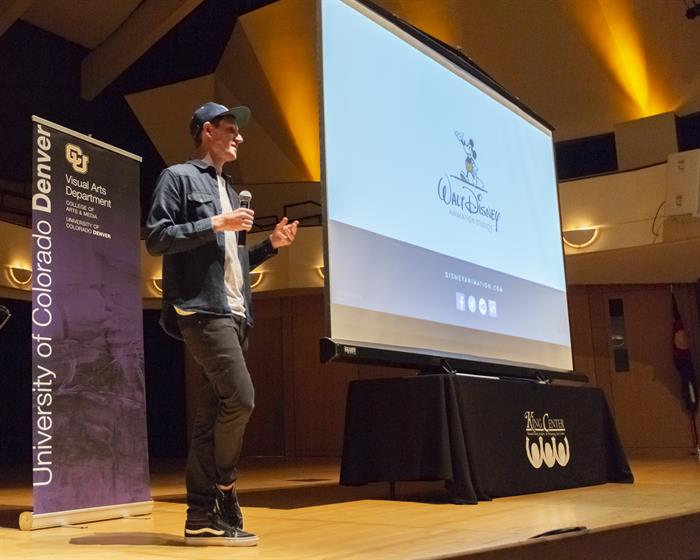 Developing skills is one thing, but learning what you want to do with those skills can be an even more difficult task. For creatives, it can be life-changing to get advice from someone working in your dream field.

“Guest artist presentations allow students to learn from professionals who are having exciting, productive careers in the arts. It helps students to see what is possible if they put in the work to learn the needed skills and earn a degree,” said Dave Walter, Director of LYNX National Arts & Media Camps.

Learning about someone’s non-traditional career path shows students there isn’t one road to success in the creative industry. This summer, LYNX students got the opportunity to pick the brains of some local creatives who all find different ways to use their degrees, experience, and skills.

Mossman studied jazz at CU Denver and graduated from CAM in 2004. He made a living playing gigs around Denver and teaching music lessons, but that changed in 2015 when Nathaniel Rateliff & the Night Sweats reached out looking for a guitarist for their next tour. Mossman started playing with the band in 2015, and they’ve been gaining more and more recognition every year. Mossman performed and answered questions for the LYNX campers where his story showed students that gigging around and networking in the industry can be a game changer.

The rising Denver band is made up of frontwoman Emma Cole, drummer Caleb Thoemke, and guitarists Seth Beamer and Joshua Hester. They took the time to play a private show for the LYNX Session Two students on campus, then sat on stage and answered questions for the students. The Colorado band was formed during Emma Cole’s senior recital at CU Denver. Emma needed a backup band for her performance so she recruited friends Caleb, Seth, and Joshua from the campus band Red Fox Run to accompany her onstage. The foursome quickly realized they'd stumbled onto something special and Wildermiss was formed. Since coming onto the scene in 2017, they’ve won local contests and played tons of shows, proving that hard work and putting yourself out there is the best way to get attention.

Recent CAM alum Chloe Tang is turning pop music upside down. As a young artist, she’s already experimented with different sounds, showing students that you don’t need to have it all figured out yet. She moved to L.A after completing her degree at CAM, but she credits the school and city with getting her prepared for the L.A scene. She performed for the students and stayed for a Q&A. She’s gaining recognition quickly with her recent feature on Spotify’s New Music Friday playlist and a number of other notable Spotify mentions.

During his talk with the Session Three students, Jeff Gipson detailed how he found his way to one of the top animation studios in the world. Gipson went to school for architecture and worked on designing over 70 skateparks both in the U.S. and internationally. He decided to go back to school to get his master’s in architecture, but his love of drawing drew him to CAM’s Digital Animation program. While studying animation at CU, he scored an internship with Pixar Studios. Soon after, he accepted a job at Disney Animation where he’s worked on incredible films like “Frozen,” “Big Hero 6,” and “Zootopia.” In 2018, he directed Disney’s first virtual reality film, “Cycles.”

Eric Jewett’s passion for film gushed off the stage while he spoke to Session Three students. He shared his experience in the glamorous world of Hollywood film and television, a life that many film students dream about. Jewett discovered his love for film production while studying painting and sculpture at Harvard. He went on to work on projects like “Weeds,” “National Lampoon’s Christmas Vacation,” “CSI: Crime Scene Investigation,” and “Code Black.” He found his way to the CAM faculty in 2017 and he’s been inspiring and guiding students in the Film & Television department ever since.

Being behind the scenes sometimes means you get less name recognition, but Ed’s work speaks for itself. Students were in awe when he came to speak to them about his extensive Hollywood film experience. An early CGI expert, Kramer worked for George Lucas’ visual effects company, Industrial Light & Magic, where he worked on “Star Wars: Episode I," Star Wars: Episode II," and Star Wars Episode: III.” His work can also be seen in “Pirates of the Caribbean II: Dead Man’s Chest,” “Jumanji,” “Harry Potter and the Chamber of Secrets,” and many other high-profile films. His extensive knowledge of CGI makes him the ultimate inspiration for anyone looking to get involved in computer animation. 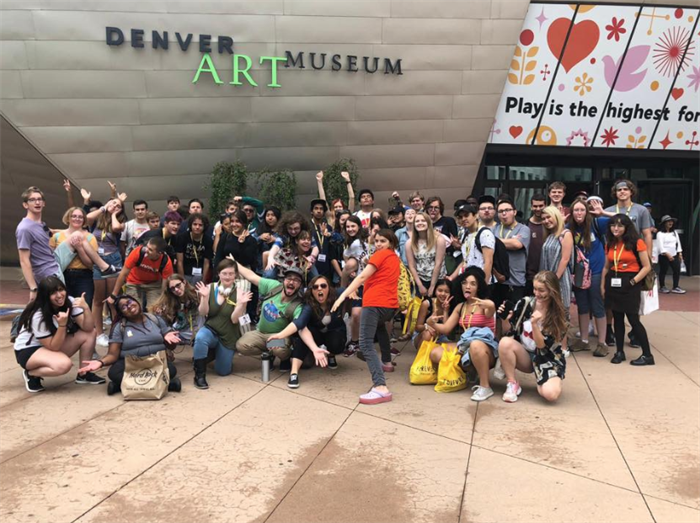 While diving into technique and execution in class is important, off-campus learning can be a great way to quiet and inspire the mind.

Session Two and Three students went on off-campus excursions around Denver with their leaders, instructors, and fellow campers.

One of Colorado’s most popular hikes, Chautauqua Park in Boulder provides the chance to get into nature while still staying close to urban life. Students bussed to Boulder with their student leaders and faculty supervisors to spend the day at Chautauqua and stopped by FlatIron Crossing for lunch too.

Students went sightseeing in downtown Denver with their groups and leaders to explore the city and the art scene that surrounds campus.

For Session Three students, a trip to the Denver Art Museum was the ultimate treat. Touring the museum with other students and leaders with a passion for art was a totally new experience.

After all of those unique experiences, students were excited to share their appreciation for LYNX Camps and left testimonials to help future parents and campers get an idea of what LYNX Camps are all about.

“Overall, LYNX Camp was one of the best/most memorable two weeks of my life. The people here are genuine friends, I developed my musicianship and took risks I would not have taken before, and I feel as though I have grown as a person positively.”

“…This was such an amazing opportunity and I’m so thankful for it. What you guys are doing is amazing. Coming to LYNX camp for the first time this year has definitely changed my mind about college. After these two weeks I plan on attending CU Denver in the guitar performance or singer/songwriter track. I'd like to thank everyone who made this possible from the bottom of my heart. Sometimes I feel more loved and accepted at camp than I do at home. I will never forget this summer and I'm totally coming back next year.”

“Amazing and totally worth the price. Staying residentially was one of the greatest times I had to make the experience more 'real'. It was like I was actually in college taking classes. Finally getting to use the tools that professionals use and to be let free into our own creative world is something that I will forever be thankful for.”