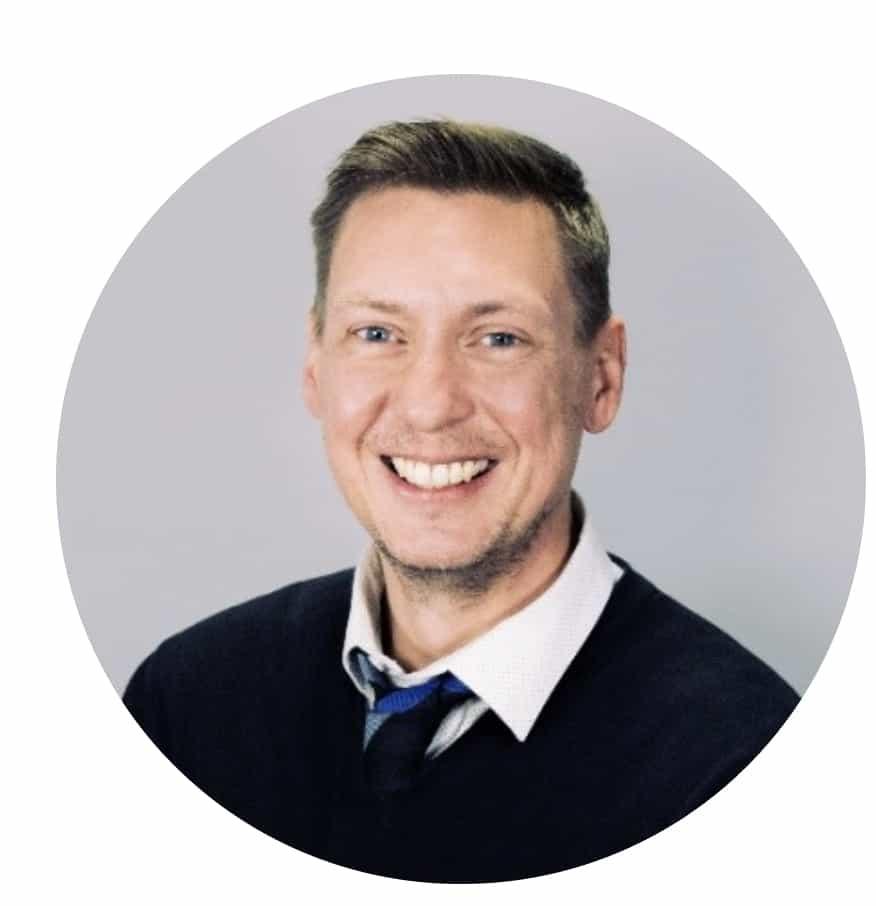 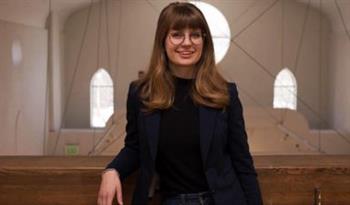 Livy Snyder (left) served as Student Curator at the Emmanuel Art Gallery before heading off to graduate studies at the University of Chicago. 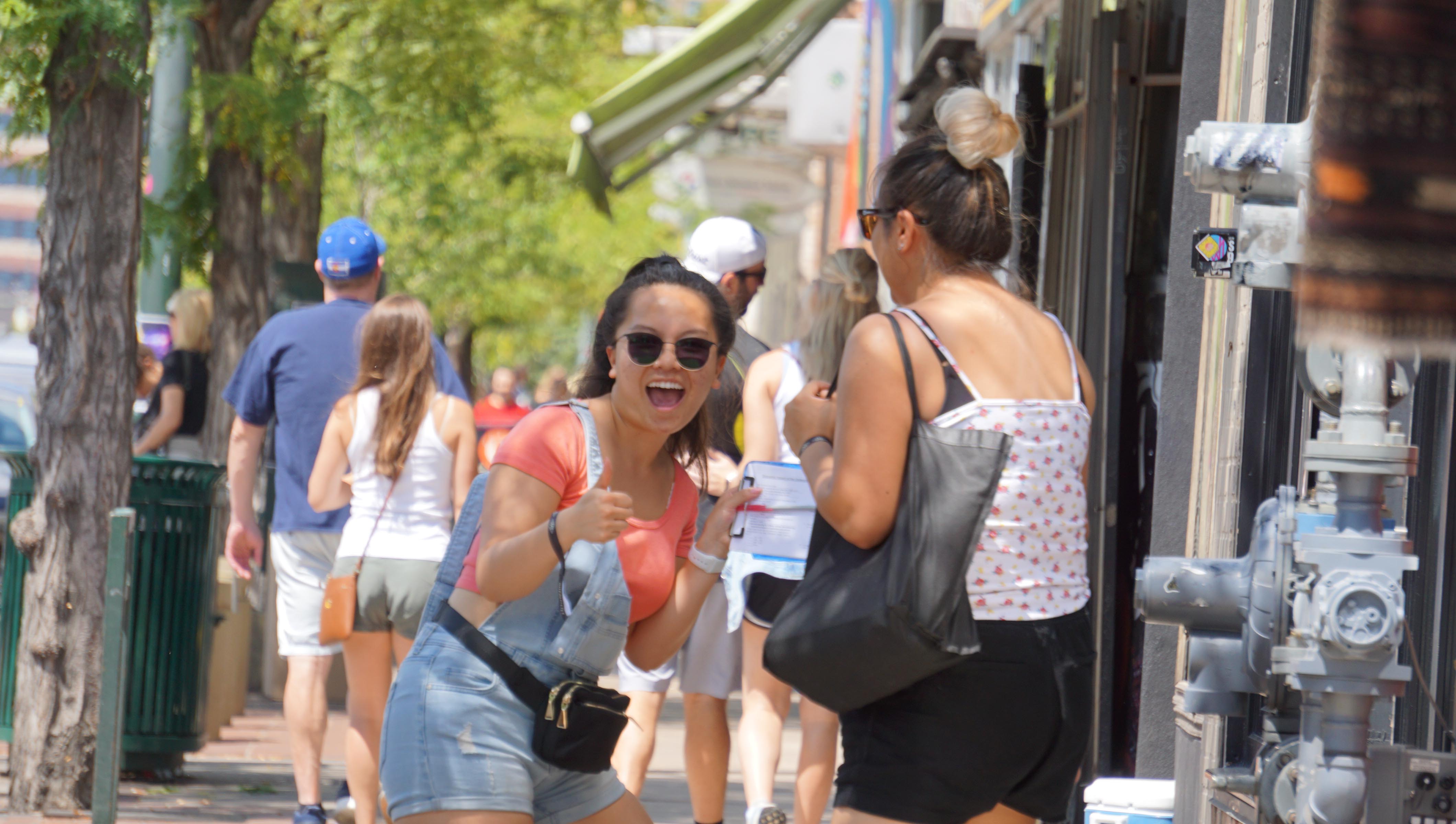 Diana Lee (above) collects surveys for self-led research conducted during the Underground Music Showcase, which took place in July 2019.
﻿

College of Arts & Media Grads Furthering Studies Across the U.S. and Globe

The path of each graduate from the College of Arts & Media (CAM) is unique. Many find careers in arts and entertainment epicenters like New York City, Los Angeles, Nashville and London, or tour the globe with their band. Others make an impact in Denver by bolstering the local creative economy through their professional and entrepreneurial endeavors––opening galleries, commissioning works, and producing documentaries. One recent group of grads is also extending the reach of CAM through pursuing advanced studies at some of the most prestigious institutions in the U.S. and around the globe.

Three recent CAM graduates, with distinctly different professional goals, have traveled many miles to pursue their passions through graduate studies.

An Art History and Painting & Drawing dual-degree graduate, with an internship at the Guggenheim in Italy on her resume, studies at University of Chicago– named in the world’s top 100 universities– to pursue a Master’s of the Arts in Humanities.

A Film & Television major, who graduated with 15 years of professional experience to reference, attends North Carolina School of the Arts, named a top ten rated program by The Hollywood Reporter,  to pursue a Master’s of Fine Arts in Creative Production.

And a Music Business grad, who displayed an unwavering commitment to leadership and community while at CAM, travels to Malaysia to pursue a Master’s of Arts in Creative Media at Sunway University, an upcoming global powerhouse institution.

“As CAM grows its reputation for preparing students to join an artistic workforce in the creative industries, some students have honed academic and research interests and have gained entrance into some of the world’s leading graduate programs,” says Laurence Kaptain, Dean of CAM. “These students value rigorous investigation, critical thinking, diversity, collaboration, and invention– and CAM is proud to send them into the scholarly world ready to advances those values.”

A dedication to scholarly, entrepreneurial, and creative work


Livy Onalee Snyder ’19 was a top student in her class, earning the distinction of the Visual Arts Outstanding Graduate. While she was an impressive Student Curator at the CU Denver Emmanuel Art Gallery, having worked on exhibitions of national acclaim, Snyder truly set herself apart when earning a coveted internship at the Peggy Guggenheim Collection in Venice, Italy. With aspirations to work as an independent curator and scholar, she continues as curatorial assistant for Supernova, a Denver digital art festival, while in her first year of graduate study at University of Chicago.

Todd Smith ’20 came to CAM Film & Television as a non-traditional student. Already with professional experience in the entertainment industry on his resume, he was looking for more than just the hands-on experience the CU Denver program is known for. At CAM, he found the skills to run his own business and set-out as an entrepreneur, through programs designed to foster both creative and business acumen.

"I remember the first time I met Todd, it was clear to me he is highly ambitious and understands what it takes to do an excellent job,” says Angie Gallagher, CAM former Scholar-In-Residence of Entrepreneurship & Enterprise.

Smith plans to take his entrepreneurial spirit and his love for creating character-based story into a career is episodic television. At University of North Carolina School for the Arts, a highly selective school of only 152 graduate students, he will have pitch ready projects that have been crafted and developed with industry savvy mentors.

Diana Lee ’20 heads to an international center of academic excellence, Sunway University in Malaysia, having earned a scholarship towards a Master’s in Creative Media. It’s a huge investment in her commitment to reaching her goals–she had been accepted to prestigious graduate programs in the U.S., but connections to Sunway through a CAM partnership for cultural and scholarly exchange and a graduate program that aligns with her professional ambitions have led her to take on the challenge of international study.

Lee says she is committed to “immersive study of the global creative industry and how music, policy, and economy can impact any community.”

Her passions lead her to look to how she can one day lend professional support to others coming up in music business.

CAM as a peer to prestigious institutions of academic rigor


“Livy Snyder, Todd Smith and Diana Lee all excelled in the classrooms and studios—but have aspirations that exemplify the CAM value of Discovery,” says Kaptain. “These three exemplars of excellence learned by doing, and as emerging peers, are important contributors to the knowledge exchange.”

These students are examples of stellar scholarship, but not the exception. CAM is the home to top ranked areas of study, including Music Business, named a top international program by Billboard Magazine, and 3D Graphics & Animation and Illustration, both ranked top programs by Animation Career Review. Strong academic programs, paired with alumni networks in top cities and firms, advance the reputation of CAM for a pipeline of student scholarly and career success.