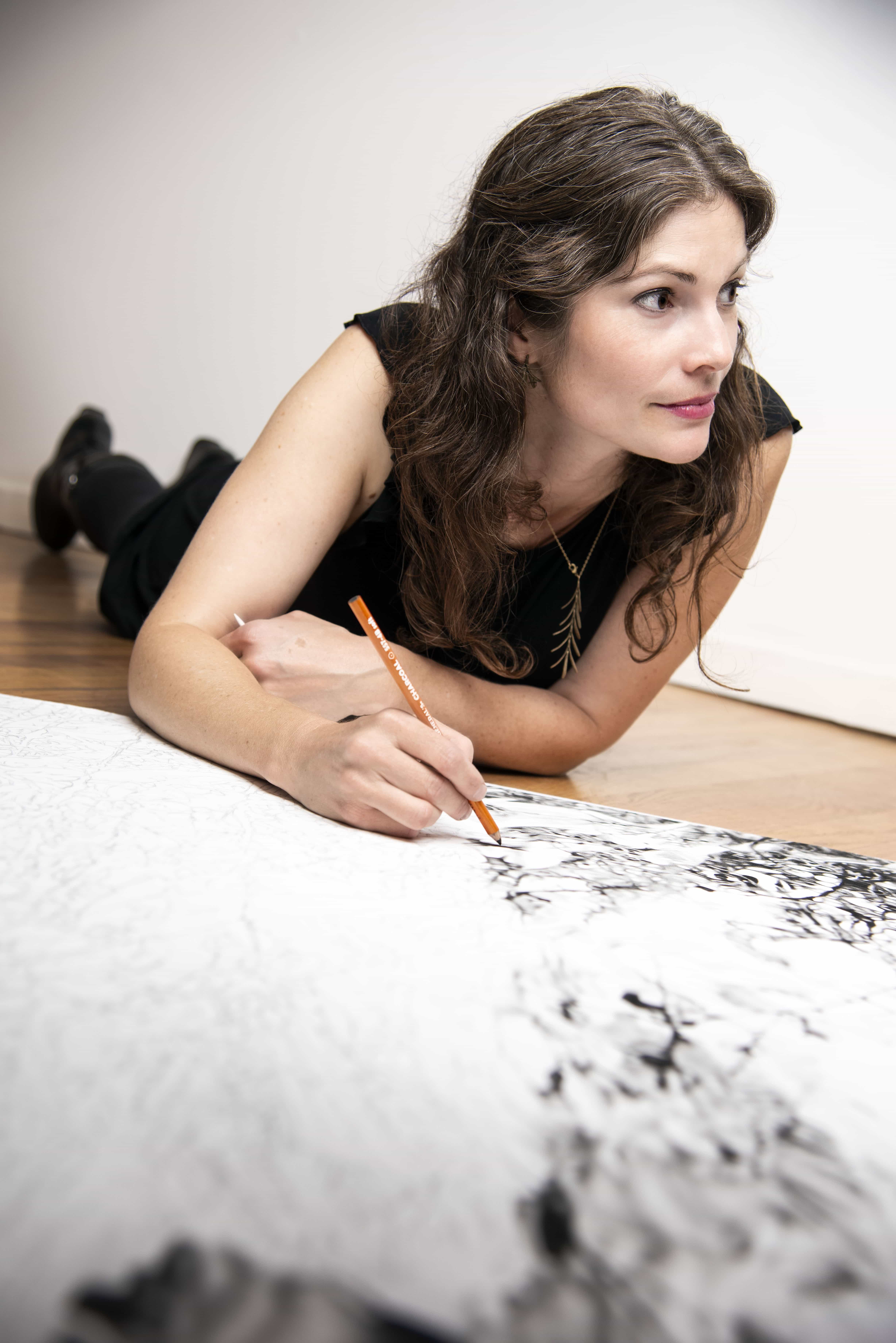 Anna Kaye was born in Detroit, Michigan and now lives in Denver where she works in her studio creating drawings and paintings that are inspired by the natural world more. Witnessing the urban decay from de-industrialization as a child enhanced her sense of empathy, compassion, love for diversity and justice, and reverence for the natural world. She earned her B.S. in geology and fine art at Skidmore College, NY. She continued her education at Yale in painting, drawing, printmaking, and photography. She earned her M.F.A. at Washington University in St. Louis where she was awarded the Laura and William Jens Scholarship and a teaching on record position. Anna Kaye’s artwork is a part of international, private, public, corporate, and museum collections including Home & Garden Television’s Green Home. Interviews and reviews include Colorado Matters, Colorado Life Magazine, Westword, and the Denver Post. Kaye donates a percentage of all sales annually to environmental funds. She is also a curator and the founder of Pink Progression, a front range collective that commemorates, celebrates, and builds on the solidarity established during the Womxns Marches. The group addresses concepts, such as human rights, equality, and gender identity. She is a former Visiting Assistant Professor and Co-Coordinator of Drawing at Metropolitan State University. Anna Kaye currently teaches at the Denver Art Museum and is represented by the Sandra Phillips Gallery in Denver. 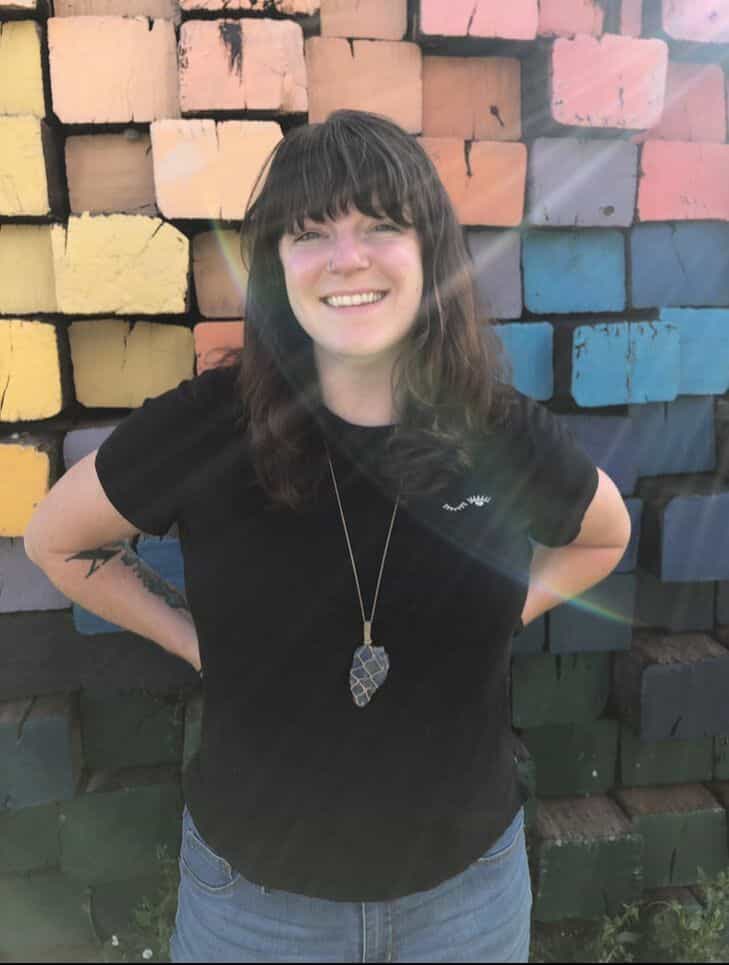 Emily serves her city as Chair of the Arvada Arts and Culture Commission. She is a strong advocate in the community for public art and for civic investment in local artists at all stages of their careers. In addition to her career in arts administration and management, Emily is a practicing artist. While Emily works in a variety of mediums, her current focus is on creating encaustic monotype assemblies using beeswax from her backyard hives. The pursuit of creating her own artistic medium inspired Emily to learn to keep bees and led her to transform her outdoor space into a haven for pollinators, planting and cultivating the raw material the bees need to create wax for her artwork. In 2016, Emily founded the much-beloved community project Art Drop Arvada. Working with artists and art-lovers throughout Metro Denver, Art Drop Arvada creates interactive, grassroots events in public spaces that bring free, hyper-local art to anyone willing to hunt for it. 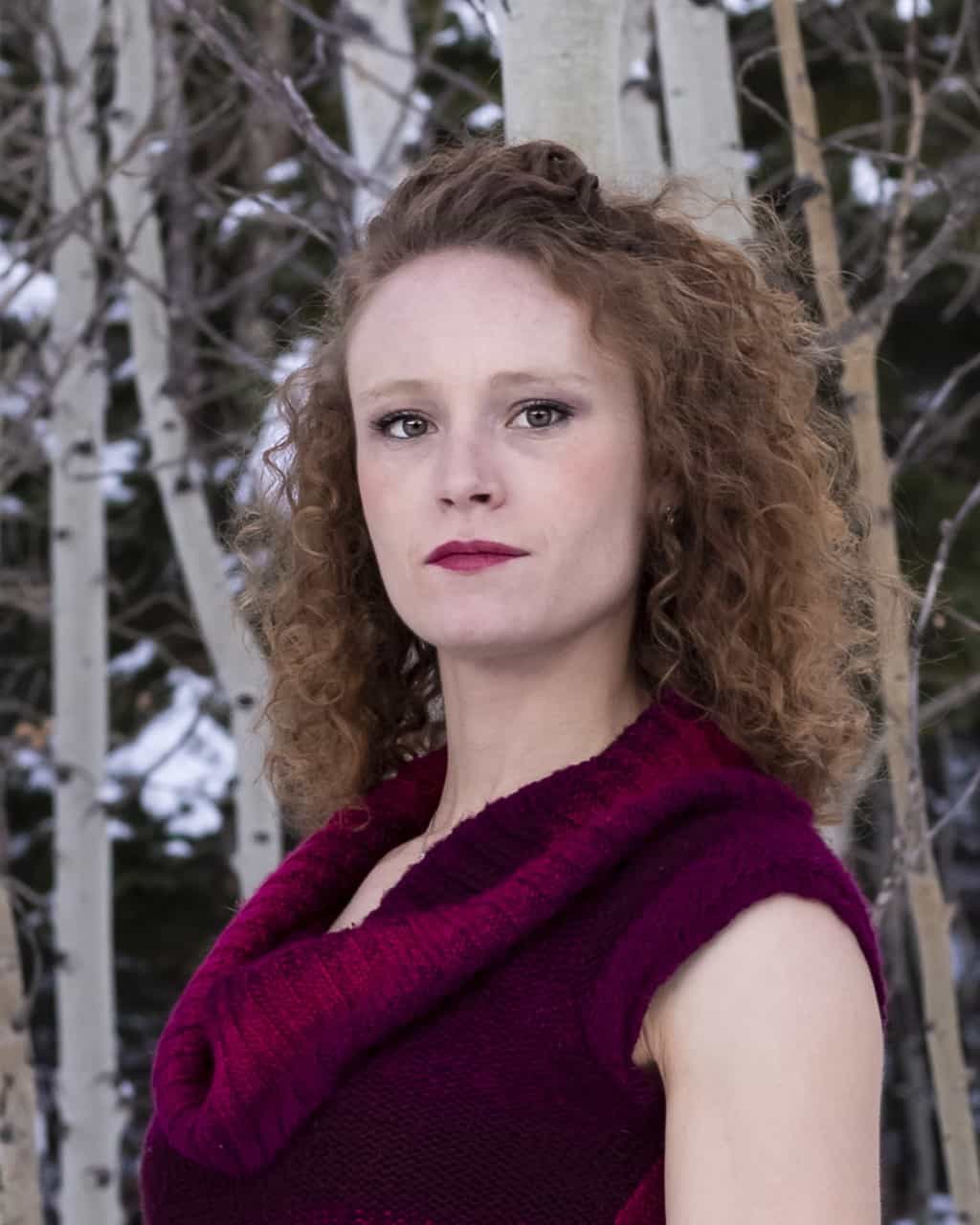 Kellie Smith is a 2017 UCD Graduate with an emphasis in photography. To Kellie, the best photo is one that has gone through an alternative process, shows the wear of life on the paper, and holds a story in the object itself. Since graduation, she has been operating a real estate photography business that specializes in 3D media and raising her two kids in Bailey, CO. 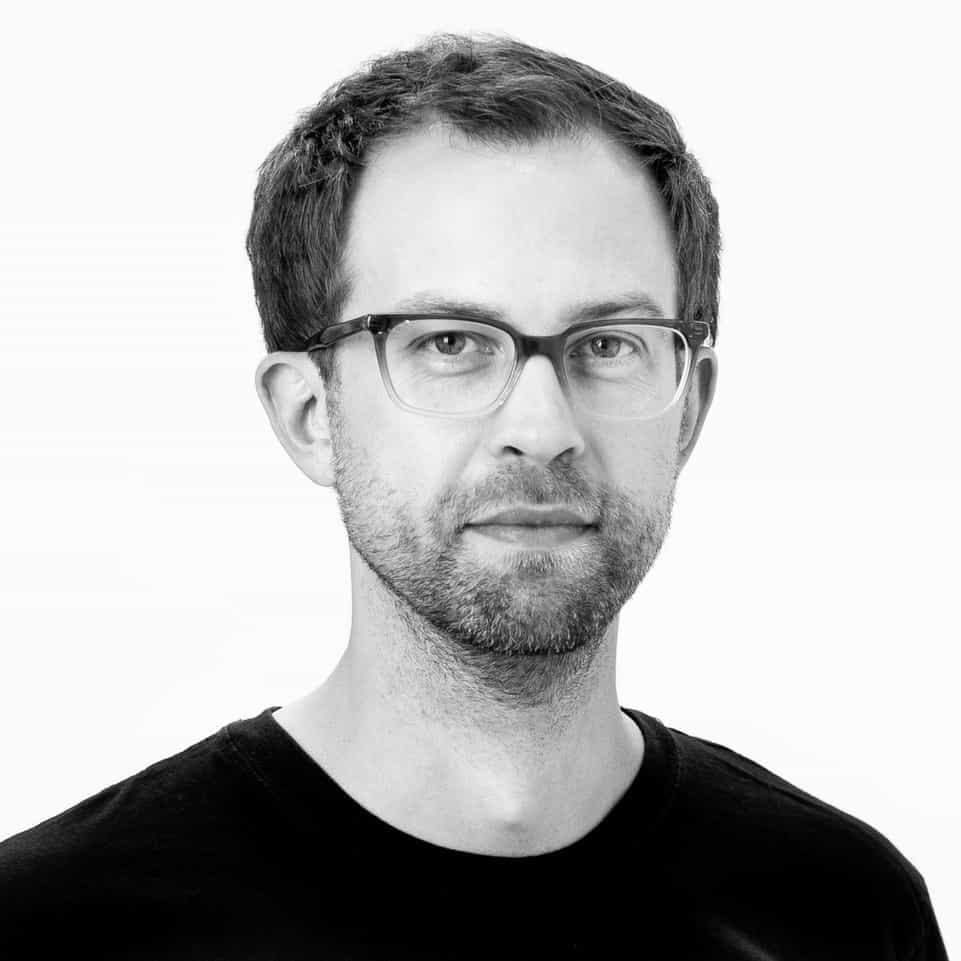 Conor King received his BFA in 2003 from the University of Colorado at Boulder and his MFA in 2007 from Pratt Institute. He has been a member of the art faculty at several colleges and universities since 2009, including the University of Colorado. King’s work has been written about in Art F City, The Denver Post, and Denver Westword. His works are included in the public collections of Photo Americas and Lake Forest College. Solo exhibition venues include Galeria de Arte Fotografico, Medellin, Colombia and Pirate: contemporary art, Denver, Colorado. Highlights from his group exhibitions include work shown at Jenkins Johnson Gallery, New York, New York and the First Draft exhibition, part of the Biennial of The Americas, Denver, Colorado. King participated in a three year subsidized studio artist residency program at RedLine Denver until 2012, where he served on the Education Committee and on the Board of Directors. He is a founding member of Tank Studios and served on the Board of Directors at the Colorado Photographic Arts from 2013-2015 where he also assisted with exhibition development. 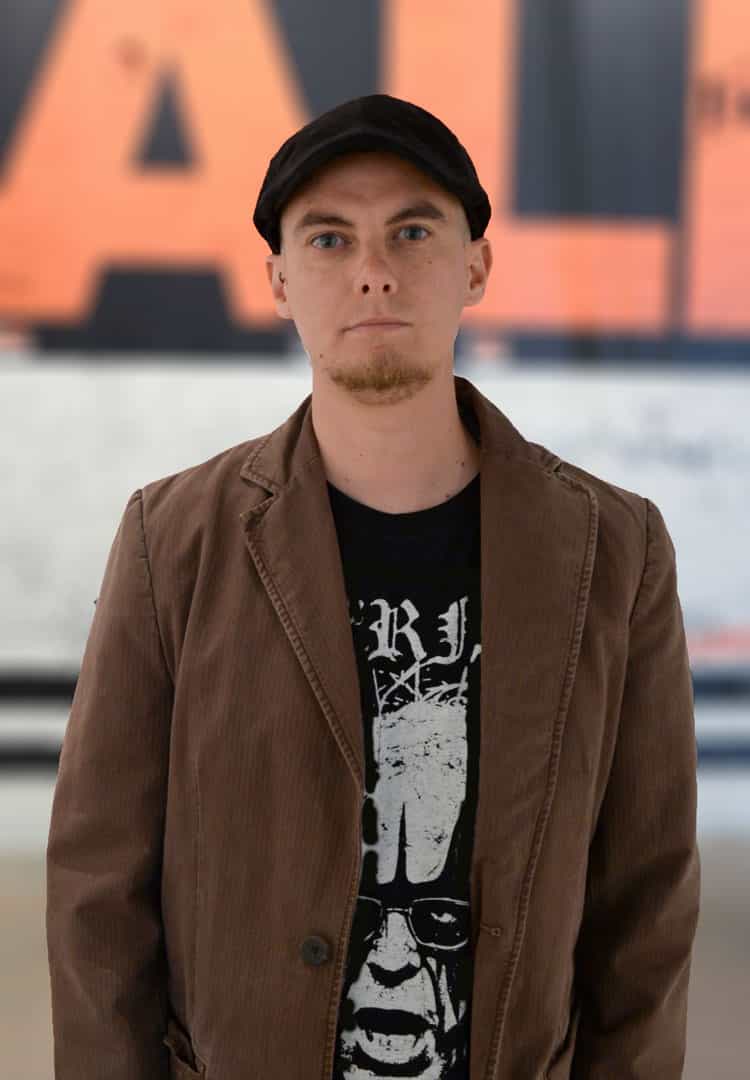 Scottie Burgess is a native to Colorado. He received dual BFA’s with emphases in Digital Design and Sculpture/Transmedia at the University of Colorado Denver, graduating with honors. As a child, Burgess earned a scholarship to study at the Bemis School of Art. Later, his interests took him to explore other creative disciplines, including philosophy and music technology, resulting in working at the Denver Center of Performing Arts, exploring the practices of live sound and audio engineering. He apprenticed under Denver artist John McEnroe, is a member at Pirate: Contemporary Art, and is active in the performance casting community. His work was included in the Biennial 600: Textile/Fiber at the AMoA, Amarillo Museum of Art, curated by Alec Unkovic, the exhibitions Manager from the influential Fabric Workshop and Museum in Philadelphia, PA. Recently, he was honored to be part of the important pro-feminist exhibition Pink Progression at the McNichols Building, collaborating as an ally.

Burgess also works in the public art realm. Work has been commissioned by the Downtown Colorado Springs Partnership to be included in their permanent collection, and the Museum of Outdoor Arts accepted his proposal for a sculpture to be placed at the base of the Republic Plaza building in downtown Denver, CO. That public work Ties Forward is now permanently sited at the Arvada Center for Arts and Humanities. His most recent public work includes a large scale site-specific assemblage to live in the lobby of the Republic Plaza.

In addition to studio and public art, Burgess has a background in design, which has included studying abroad in Copenhagen at DIS. His design endeavors have involved the development of The Center of Arts as Systemic Change, employing interdisciplinary creatives to advance profound awareness based change. He has also been certified by INDEX: Design to Improve Life, aiming to use creativity as a tool to facilitate positive change worldwide. 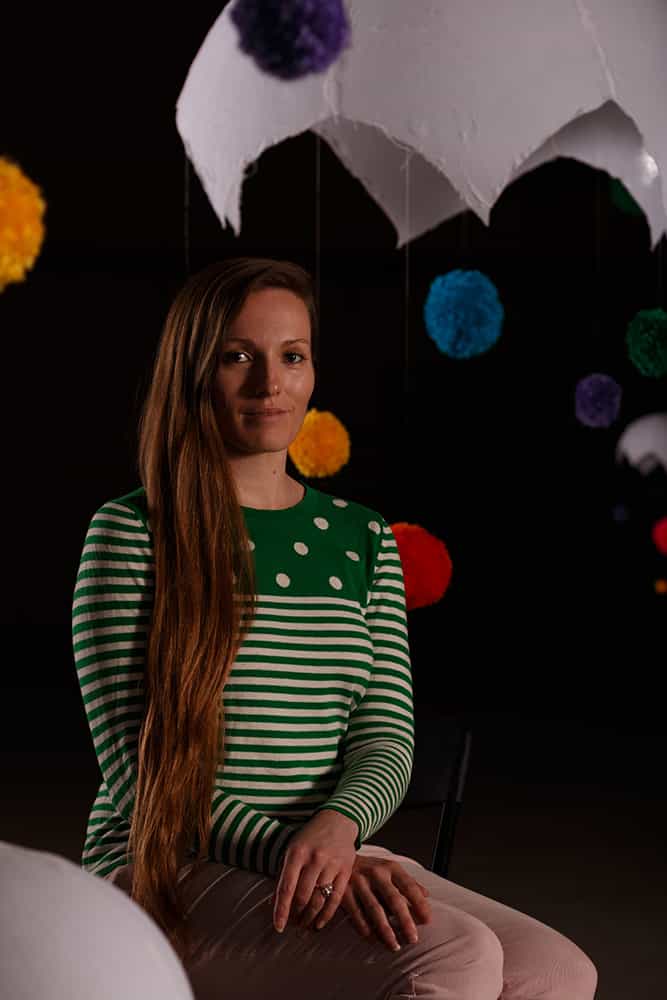 Tiffany Matheson is a mixed and multimedia artist native to and working in Denver, CO who specializes in sculpture, installation, performance and public art. She holds a bachelor’s degree in Biology with Studies in Sculpture from CU Denver, and has experience with mold making and casting, woodworking, welding, textiles, acrylic manipulation, electronics, music, written word, and more. While her work varies greatly, she is inspired by light, texture, sound, color, nature, the botanical world, and outer space. Her work is often based on geometry and mathematics, with emphasis given to precision and attention to detail. 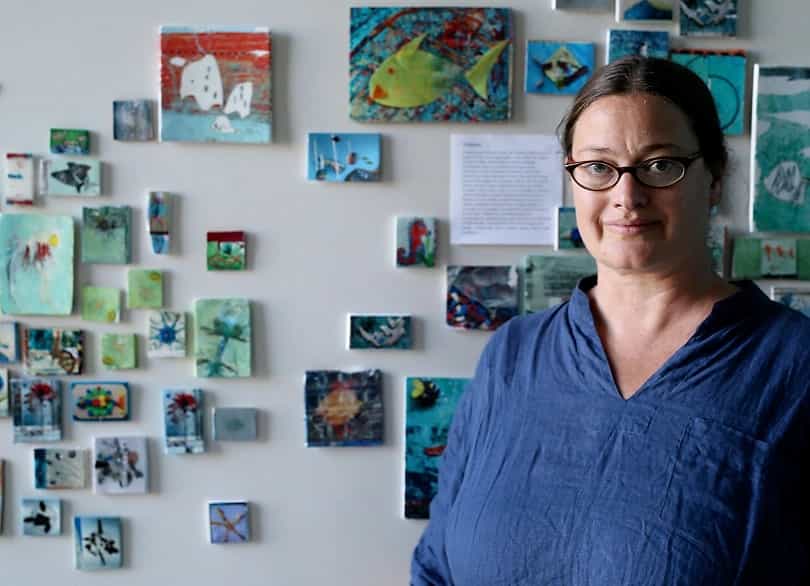 Lee Lee is an artist whose work explores the collisions between traditions and globalization while representing environmental impacts of our post-industrial, chemical age. She has developed a process-oriented practice that conveys emotional textures within communities facing environmental disruption based on direct experience in over 40 countries. Her current projects incorporate demonstrations of resilience by diverse communities as they face ecological adversity. 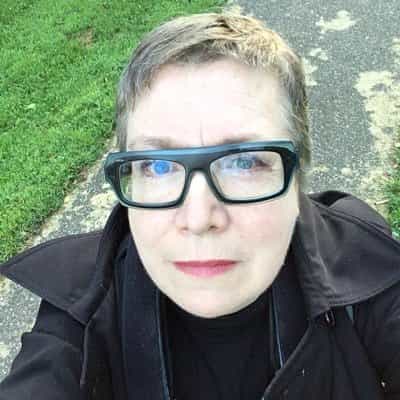 Deirdre O’Mahony is a visual artist whose practice is informed by a deep interest in rural sustainability, farming, food security and rural/urban relationships. For more than two decades she has investigated the political ecology of rural places through public engagement, archival and moving image installation, critical writing and cultural production.