Rian Kerrane, Visual Arts and sculpture professor, was tasked with creating a mezuzah, a vessel traditionally affixed to the doorway of Jewish households, for the Golda Meir House Museum.

On January 10, 2022, civic leaders from Denver gathered on the Auraria Campus to rededicate the Golda Meir House Museum. CU Denver Professor Rian Kerrane created a mezuzah which was affixed to the doorway of the late Israeli prime minister's Denver house during the rededication ceremony.

Typically adorning the doorframes of Jewish households, mezuzahs contain a very small scroll of parchment on which specific portions of the Torah have been painstakingly written. The mezuzah that originally adorned Meir's house was significant in helping identify the house as being associated with Meir and her family, thus solidifying the case that it was worth saving from demolition. Kerrane is a professor in the Visual Arts department of the College of Arts & Media, specializing in sculpture. Fashioning the new mezuzah out of cast bronze and steel, Kerrane calls the piece Fluid Units and identifies with Meir's immigrant background. Kerrane, originally from Ireland, writes that the "vantage point of not belonging to her home nor to her adopted land" fuels her visual language, which "manifests in sculpture, installation, performance, and print." The design of the mezuzah is that of a vessel one might use for science experiments. 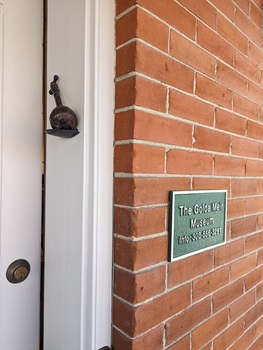 The Legacy of Golda Meir

Golda Meir was Israel’s fourth prime minister and the first woman elected to the position. Meir played a pivotal role in the formation of Israel as a modern nation state and held the office of Prime Minister from 1969 to 1974, during which time she saw the country through the Yom Kippur war and the terrorist attacks of the Munich Olympics which claimed the lives of five Israeli athletes and six coaches. But before Golda moved to Palestine to work on the formation of modern Israel, and before she shot to political significance on the world stage, she lived in Denver’s west side in a duplex with her sister, brother-in-law, and her young niece. It was in this small house that Meir started to develop her political philosophy and eventually decided to emigrate to Israel.

Thanks to the efforts of community leaders such as Jean May, Congresswoman Pat Schroeder, Senator Dennis Gallagher, and Bill and Beth Sagstetter, Meir’s Denver home was identified and moved just before it was slated to be destroyed. The house was relocated to the Auraria campus in 1988 and designated a Denver landmark in 1995. It has since been restored thanks to private contributions and a grant from the Colorado Historical Fund. Today, the side of the duplex where Meir lived serves as a museum, while the other side serves as a conference room for the Auraria campus.