Professors Yang Wang, Roma Sur, and Nate Thompson were all awarded for their efforts to make available the art and experiences of historically marginalized peoples. 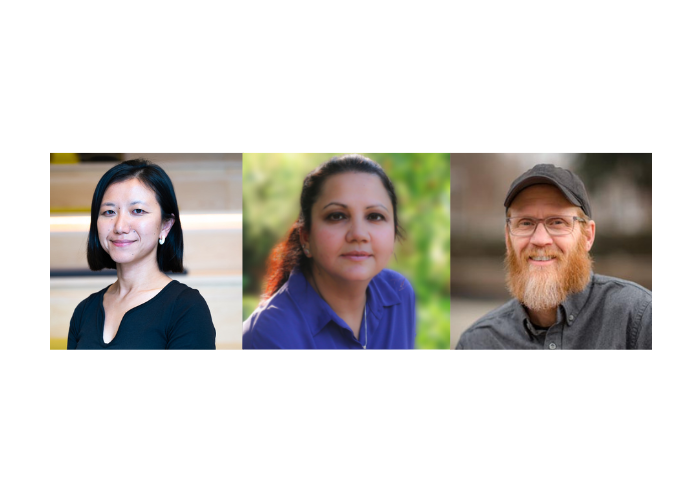 “CAM’s EDI Awards were instituted to seed and celebrate efforts that increase awareness of disparities within and across systems, inspire positive change, and make visible the work art and art scholarship do to create a more hopeful and just world,” writes Mark Rabideau, Associate Dean for Faculty and Student Affairs.

Art History Professor Yang Wang, PhD is the 2022 Celebrate Equity Awardee for her work de-colonizing curricula, research efforts, and leadership in extra-curricular advocacy groups on the CU Denver and Anschutz Medical campuses. The art history curriculum she has either revised or created “confront[s] issues of anti-Asian sentiment and the ruination of Asian American neighborhoods, and opens the imaginations of our students by decolonizing existing course offerings by including scholars and theorists of color, women, and the queer community,” explains Rabideau.

Wang’s forthcoming book, Yellow Earth: Regional Ink Painting in the Age of Global Modernism, takes an in-depth look at the contributions of a regional painting collective in Maoist China (1949–1976). Wang’s research, for which she received a Getty Award to complete, exemplifies the spirit of EDI initiatives. Wang describes her research as “amending the neglected status of Chinese art and other marginalized histories in the Euro-American-centric narrative of modern art.”

Professor Roma Sur was instrumental in the development of the film “MISS-TAKEN”, written by student (now alum) Chilli Kellaway ‘21. Sur started teaching in the Department of Film, Media and Journalism Studies at the University of Denver, in Fall of 2022, as a professor of Screenwriting and Film Production. “MISS-TAKEN” is a live-action film that tells the story of a trans woman who wakes up in a mysterious facility that is slowly, methodically chipping away at the woman’s identity. In the film, the character’s spirit is shown visually separate from the character herself, and as the film goes on, her spirit fades. Kellaway developed the script in Sur’s 2020 Script Writing for Fiction class. Sur worked with Kellaway to write an EDI Student Grant in 2018, which was used to produce and edit a rough cut of the film. Sur encouraged Kellaway to pare down the dialogue “to really emphasize the silence of the film,” Kellaway explains.

The rough cut was directed and edited by Thompson. Thompson read Kellaway’s script and felt it was a story that needed to be told. “When and where I grew up, there was only space and acceptance for a strict binary of gender expression and a narrow definition of acceptable sexual identity. I have witnessed the damage of these constrictive definitions on identities. This story calls out the bias of these definitions and the trauma it does to individuals,” Thompson says.

Together, Thompson and Sur submitted “MISS-TAKEN” for another EDI award, and their campaign was successful in winning the 2022 Seed Equity award. The funds will be used to take the film to the finishing line. A handful of CAM alumni, Taylor Neumann '21, Christopher Riggs '21, and Sam Burt '20, will be working on the post-production of the film. Cameron D. Smith, currently a senior studying Film & Television, is the lead editor. The group is working toward a target release date of March 2023.