Punk and New Wave Art, Posters, and Design to Cover the Walls of The Emmanuel Art Gallery

(October 8, 2021, Denver, CO)––Punk and New Wave posters will take over the walls of the historic Emmanuel Art Gallery from October 14 through December 21 in electrifying tandem exhibitions, depicting the revolutionary intersection between music, design, and pop culture.  “Too Fast to Live, Too Young to Die Redux: Punk Graphic Design” and “Reversing Into the Future: New Wave Graphic Design” feature the storied posters, patches, and fashion from the collection of Andrew Krivine, who holds one of world’s most important collections of Punk and Post-Punk graphic art.

Krivine’s private collection, on loan from his New York City archive, is one of the largest of its kind in the world. He began collecting in the 1970’s during regular stays in England visiting his late father’s family. More than just a fan of early punk sounds, Krivine was drawn to the fusion of music, graphics, and fashion that came with scene, and especially the designs that adorned the posters and album covers.

“These pieces are as impactful and rich as any art created in 20th century,” says Krivine. “They stand with works of Rauschenberg and Warhol because they are born from creativity and striking vision.”

Hanging from the walls of the former-religious-space-turned-art-gallery will be the iconic graphics that not only promoted records and musical acts, but a lifestyle. The immediately recognizable typeface and imagery that introduced masses to groups such as The Sex Pistols, The Clash, and The Slits also encouraged a rejection of norms by using imagery that shouted anarchy, distrust, and rebellion. Safety pins, newspaper cuttings, and crude graphics are forever associated with unpolished early days of punk rock and owed to the imagination of pioneering graphic artists.

The softer, pop-oriented designs that represented the New Wave genre detail the shift in culture that directly descended from and was in response to punk rock. The posters and designs are the more accessible counterpart to the broken window, sweat-stained designs of the punk era but still pay homage to a lifestyle lived outside of the lines.

“The New Wave sound and look harnesses the energy of punk rock but opened itself to art influences and 20th century design,” says Krivine. “New Wave was also a transmission mechanism for record companies to capitalize on Punk Rock with a more palatable offering to the masses.”

The exhibition is stacked. Posters from that promoted Patti Smith, The Sex Pistols, Elvis Costello, Grace Jones, Joy Division, The Dead Kennedys and other legends will invade the gallery. Visible themes pay homage to the issues of the era that explore economic inequity, Western imperialism, feminism and gender identity, racism, and global influences.

The exhibitions are co-curated by students from CU Denver’s College of Arts and Media, under the direction of Art History professor Maria Buszek and Emmanuel Art Gallery director Jeff Lambson. Krivine sought out Buszek to bring the collection to Denver because of her research and publications on the impact of punk on design and culture. Her upcoming book “The Art of Noise” explores the ties between contemporary feminist art and popular music.

“The artists and themes that Jeff’s and my CU Denver students selected for this exhibition zero in on not just the groundbreaking aesthetics of this moment, but also the ways in which these musicians so often demonstrated a keen understanding of politics and history in their visuals,” says Buszek.

“Too Fast to Live, Too Young to Die Redux: Punk Graphic Design” and “Reversing Into the Future: New Wave Graphic Design” opens with a celebration at 6pm on October 14th at the Emmanuel Art Gallery on Auraria campus.  The show runs through December 21st. 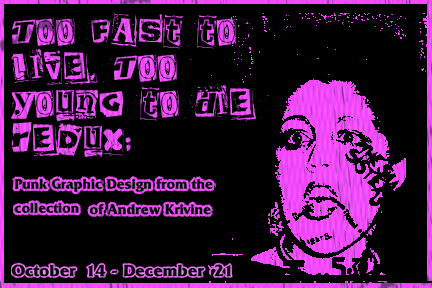