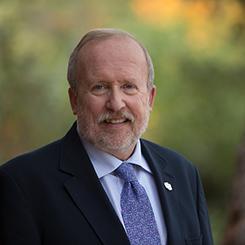 Dean of the College of Arts & Media

Laurence Kaptain, Dean of the College of Arts and Media at the University of Colorado Denver brings 20 years of higher education leadership experience at leading public and private universities to his latest positing. He currently serves on civic, regional and national boards, including the Arts Schools Network, Arts and Design Alumni Project dba the Strategic National Arts Alumni Project, Opera Colorado, the Friends Foundation of the Denver School of the Arts, and is on the Executive Committee of the Colorado Business Committee for the Arts (CBCA).

His recording of Stravinsky works with New York’s famed Orpheus ensemble won the 2001 Grammy Award for Small Classical Ensemble, and he had a long career as a performer and was heard with the, New York Philharmonic the Chamber Music Society of Lincoln Center, the Philadelphia Orchestra, the San Francisco Symphony, Pittsburgh Symphony, and has recorded with the Chicago Symphony, St. Louis Symphony, St. Paul Chamber Orchestra, and the Czech National Symphony. He has also appeared, collaborated or recorded with artists such as Elvis Costello, Yo-Yo Ma, Karlheinz Stockhausen, Robert Altman, Rudolf Nureyev, Suzanne Farrell, Isaac Stern, Pierre Boulez, Georg Solti, Hugh Wolff, H. Robert Reynolds, Larry Rachleff, Robert Altman, Elliot Carter, Gil Shaham, Henri Dutilleux, Suzanne Farrell, Kurt Masur, Henry Mancini, Donna McKechnie, Carol Channing and others. In the summer of 2014, he appeared in performances with the Philadelphia Orchestra, and in the fall of 2013 was featured in 3 concerts with the National Symphony at the Kennedy Center under the direction of Neeme Järvi.

Prior to assuming this leadership post at CU Denver in 2014, he was Dean of the College of Music and Dramatic Arts and Penniman Family Professor of Music at Louisiana State University from 2009-13. A champion of accessibility to creativity and the arts for all students in public education—Kaptain traveled frequently to Washington DC meeting on arts integration initiatives with former President Bill Clinton, NEA Chair Rocco Landesman, and key staff members from President Obama’s Committee on the Arts and the Humanities. While at LSU his work in the philanthropic community in Baton Rouge, and alumni contacts in Hollywood helped secure a naming of the opera program, and donation of the music library of the legendary composer Bill Conti. Prior to his time at LSU, he was Dean of Shenandoah Conservatory near Washington, DC, Director of the heralded Schwob School of Music in Georgia, and Vice-Provost for Faculty Programs and Academic Quality at UMKC. He also served on the music faculties of Drake University, Oberlin Conservatory, the University of Wisconsin Madison, Stephen F. Austin State University, and UMKC Conservatory of Music and Dance.

He received the first doctorate in percussion instruments at the University of Michigan, where he was a Fulbright Scholar to Mexico and received the prestigious Rackham Graduate School Pre-Doctoral Fellowship. At Michigan his major professor was Michael Udow, and he also studied with Charles Owen. His other degrees are from the University of Miami and Ball State University. His experience as a Fulbright Scholar to Mexico informed and advanced his leadership of international research, creative work, and cultural exchanges in Singapore, Malaysia, China, South Korea, Uganda, India, Qatar, France, Italy, Hungary, the Czech Republic, Denmark, the Netherlands, Switzerland, Ecuador, Panama, Nicaragua, and Guatemala.