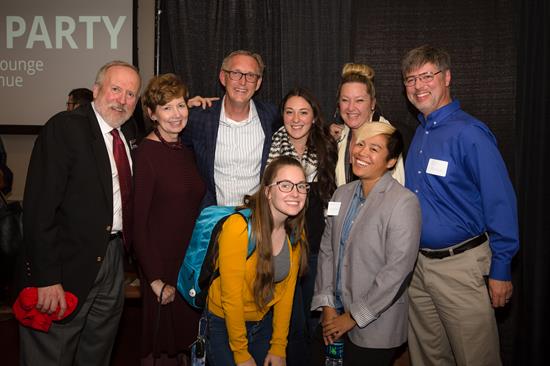 Laurence Kaptain, Dean of the College of Arts and Media at the University of Colorado Denver, brings over 20 years of higher education leadership experience at leading public and private universities to his new assignment. He recently served as President of the Association for General and Liberal Studies. In 2014 he was named a Fellow in the Royal Society of the Arts.

Dr. Kaptain served as the Director of Creative Initiatives in the Department of Research and Economic Development and Paula Manship Professor of Music, and prior to that, Dean of the College of Music and Dramatic Arts and Penniman Family Professor of Music at Louisiana State University from 2009-14. A champion of accessibility to creativity and the arts for all students in public education—Kaptain traveled frequently to Washington DC meeting on arts integration initiatives with former President Bill Clinton, NEA Chair Rocco Landesman, and key staff members from President Obama’s Committee on the Arts and the Humanities. He arranged for funding to support international leaders in creativity to speak at annual LSU convocations, diploma ceremonies and special events at LSU, including Academy Award Winner Bill Conti, David Pogue, Steven J. Tepper, Eric Booth, Elizabeth Long Lingo, Liz Lerman, Margo Drakos, and Jaron Lanier.

Prior to assuming this post at LSU, he was Dean of Shenandoah Conservatory near Washington, DC, Director of the heralded Schwob School of Music in Georgia, and Vice-Provost for Faculty Programs and Academic Quality at UMKC. At Shenandoah Conservatory he awarded honorary doctorates to famed dancer/choreographer Mikhail Baryshnikov, journalist David Pogue, pianist John O’Conor, and Tony Award Nominated Actor, choreographer Murray Lewis and Independent Film Director, Producer, and Writer J. Robert (Bobby) Spencer.

He received the first doctorate in percussion instruments at the University of Michigan, where he was a Fulbright Scholar to Mexico and received the prestigious Rackham Graduate School Pre-Doctoral Fellowship. Laurence Kaptain appears regularly with orchestras, including the New York Philharmonic, The Chamber Music Society of Lincoln Center, the Philadelphia Orchestra, the San Francisco Symphony, Pittsburgh Symphony, and has recorded with the Chicago Symphony, St. Louis Symphony, Orpheus, St. Paul Chamber Orchestra, and the Czech National Symphony. He has also appeared, collaborated or recorded with artists such as Elvis Costello, Yo-Yo Ma, Karlheinz Stockhausen, Robert Altman, Rudolf Nureyev, Suzanne Farrell and others.

In the summer of 2014, he appeared in performances with the Philadelphia Orchestra, and in the fall of 2013 was featured in 3 concerts with the National Symphony at the Kennedy Center under the direction of Neeme Järvi. Kaptain is a founding partner of the Alliance for the Arts at Research Universities (a2ru), a partnership of over 40 institutions committed to transforming research universities to ensure the greatest possible institutional support for interdisciplinary research, curricula, programs and creative practice between the arts, sciences and other disciplines. He is also on the Board of Directors of Arts Schools Network, Arts + Design Alumni Research, a nonprofit that manages the Strategic National Arts Alumni Project (SNAAP), Opera Colorado, and the Colorado Business Committee for the Arts.

“Dr. Kaptain’s national visibility in arts studies place him in a position of thought leadership in the arts nationally and internationally. We’re fortunate to have someone of his caliber join us at this critical juncture for CAM, and I’m confident in his ability to lead the college to new creative achievements.”—Provost Roderick Nairn